Fort George, Vis is being restored to its magnificent former glory!

We were lucky enough to be invited to share in the celebrations to mark the 200th anniversary of the establishment of Fort George by the British in 1813. And what a party it was! 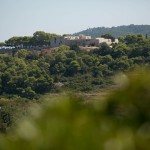 The attached article gives you a flavour of what we experienced. But it cannot do justice to William Wenkel's generous hospitality, on two of the balmiest of balmy evenings in the most perfect of romantic settings.

William has negotiated a 25 year lease on the fort and embarked on a major restoration project the second phase of which is on schedule to be completed in time for the opening of the 2014 holiday season. Once open the venue will contain a top quality restaurant and garden night club, with an art gallery and private dining facility. There will also be three small museums showcasing the three important periods of history in which the fort played a part, namely: