CroatiaWeek reports that St. John’s Wood Cricket Club from London beat their Hostes(!) from Vis, the Sir William Hoste Cricket Club, in the final to be crowned the winners of the 2nd Vis International Sixes tournament held on the picturesque Croatian island of Vis in May. 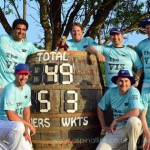 The tournament, in its second year, was clearly a huge success and credit must go to the Vis team for doing a sterling job organising the event and the amazing hospitality they provided all the sides and spectators.